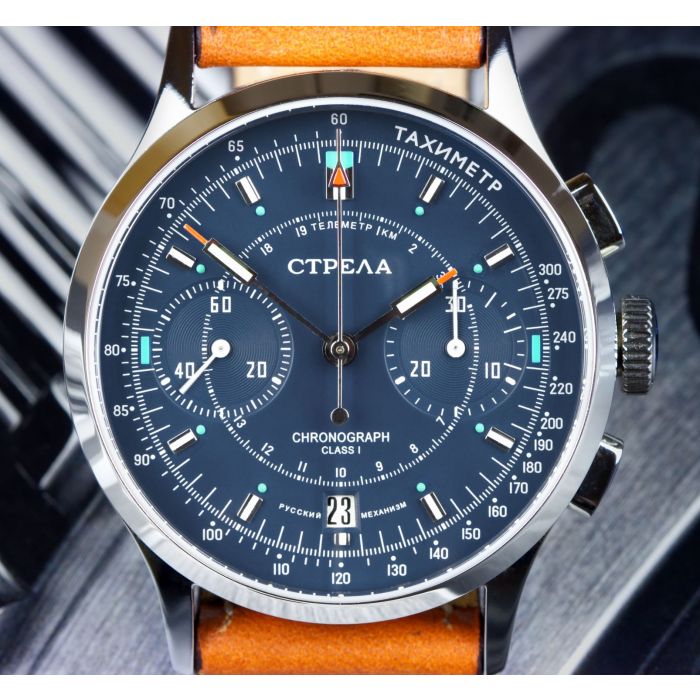 The CO38CYPS has a very special PETROL dial!

The CO38CYPS is a reissue of the legendary Strela Cosmos chronograph with Cyrillic inscription in a 38mm case.

Differences to the former, now sold out model:


In the 50's to 70's, Poljot produced the Strela "Schaltradchronograph" (column-wheel-chronographs)  caliber 3017, which is much sought-after not only by collectors. Fortunately, Strela  now remembers this past and reissues the design of these elegant and historic chronographs - now with a stainless steel case and the well-proven Poljot caliber 3133.
Strela = Russian for "arrow"

The amazingly detailed and decent watchcases have a diameter of 38 mm and a height of 15 mm. In contrast to the earlier models without date, the new edition shows the date between the numbers "4" and "5"; The standard glass bottom is screwed and provided with the  limit number  of 300 pieces.
The sapphire crystal is slightly curved and the "baguette" shaped pushers and the simple crown complete the 50's design!

On the PETROL, Cyrillic inscribed dial are a telemeter and tachymeter scale attached, the hands and indices are luminous. The old models were produced under the name Poljot, Sekonda and Strela. The factory made  a distinction   between a higher quality Export version ("Class 1")  and a Soviet Union version. These differences no longer exist today, but as a small reminder of the "old times" Strela has printed these dials with the rating "Class 1".

You may also be interested in the following product(s)
important notice
Due to the temporarily reduction in VAT, you will automatically receive a discount in the shopping cart :-)
News