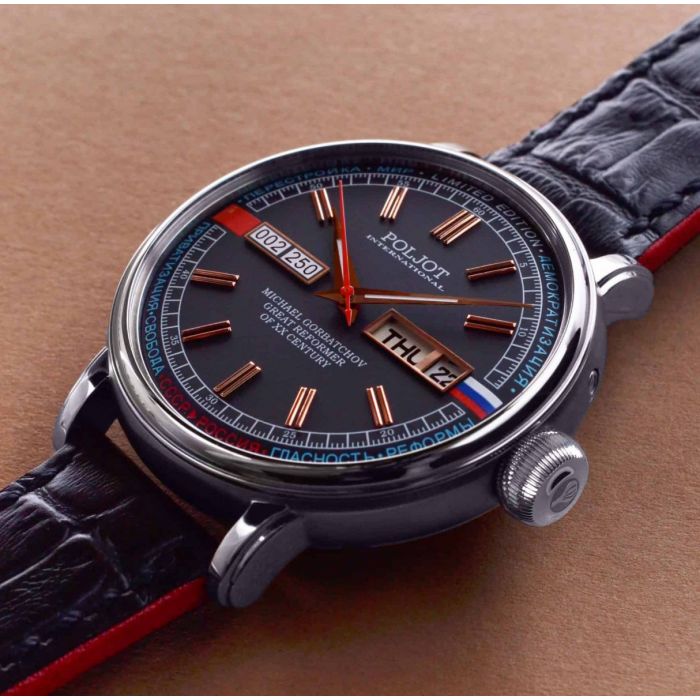 On occasion of the 70th anniversary of Michail Gorbatchov in 2000, the designer Alexander Shorokhoff  developed and produced a jubilee watch for him. In the nineties of the 20th century, the face of Gorbatchov was known all over the world. His degree of celebrity was higher than of each other idol.

This watch model has been sold for long time. This was the reason for Poljot International  to bring back this successful watch in the year of the 25th jubilee of the manufacture. This time the watch has an automatic movement, a case of stainless steel with better shape and more flat than its predecessor. Now, the figures at the dial are appliqués with rose gold plating.

Since Michail Gorbatchov was the men who helped to break open the “Iron Curtain“ between East and West the watch shows two flags symbolizing the transition from the USSR to the Russian Federation.

The light blue writing at the rim of the dial is also symbolizing the renewal of the country with the words “Perestroika“, “Peace“, “Democratizing“, “Privatization“, ”Freedom“, “Glasnost“ and “Reforms“.
This watch will be produced in limited edition of only 250 pieces.

The screwed crystal back offers the view to the beautiful russian Slawa caliber!