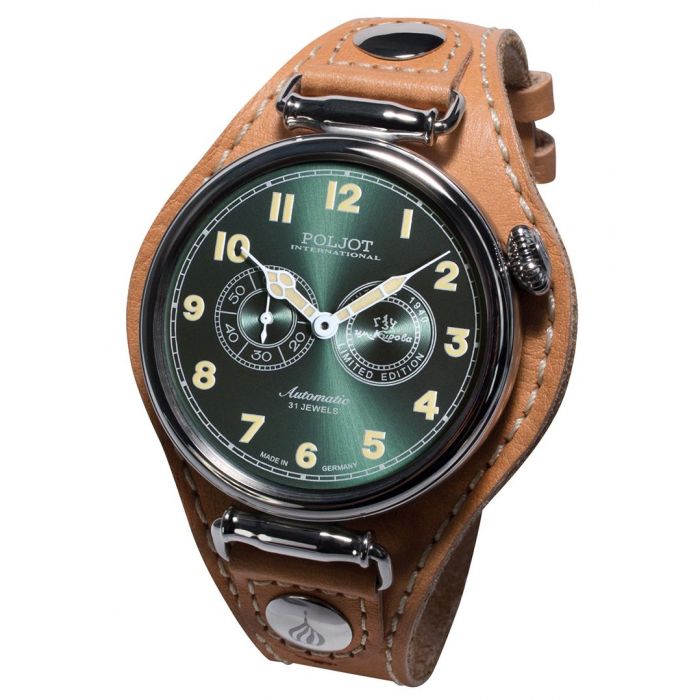 Legendary watch from the 1940s

With the purchase of the Ansonia Clock Factory and the Dueber Hampden Watch & Co., accompanied by 21 former employees, the First State Clock Factory was founded in Moscow in 1930.

After installation and assembly work, the first Soviet pocket watches could be produced in a series of 50 pieces, with all individual parts being made in-house. In 1932, after initial difficulties, it was possible to produce according to plan.

This was achieved not least through the personal commitment of the party member and Lenin's comrade Sergey Kirov.

The watches produced there also got his name. Legend has it that the Red Army urgently needed a wristwatch before the start of World War II. Even Stalin got involved in this matter.

One day he called the management of the factory and set the task of presenting a wristwatch for the military within 3 days, even though he knew that the factory only produced pocket watches.

The engineers came up with a simple solution after quite a long discussion and worrying. You have welded an unusual and robust bracelet holder to a pocket watch case. This is how the first official Soviet military watch was born!

The “Poljot-International” brand already launched such a limited replica of the 1940s for the 60th anniversary of production. In 2020 the time was ripe to present the second version of the replica and to commemorate the 80th anniversary accordingly. The new model was named "Kirovskie II".

Overall, the designers and technicians worked on the model for a year. The design of the watch has been adapted very closely to the original, but the watch has now been manufactured in a smaller case with a diameter of 40 mm.

The inside of the watch was also replaced - an automatic movement from Vostok 2415 with a decentralized second at 10 o'clock was installed. In order to be able to bring the position of the second to the 9 o'clock position, as in the original, the crown was attached to the case at 2 o'clock.

So the clockwork was turned counterclockwise. The movement's rotor has Geneva stripes and the screws are blued.

The lugs for the bracelet were kept similar to the original, but technical modernizations were also made here. In order to be able to change the band, only one screw in the front area of ​​the abutment has to be loosened.

The bracelet has remained the same as it was in the 1940s. It is adorned with two steel buttons and the logo of the “Poljot-International” brand.