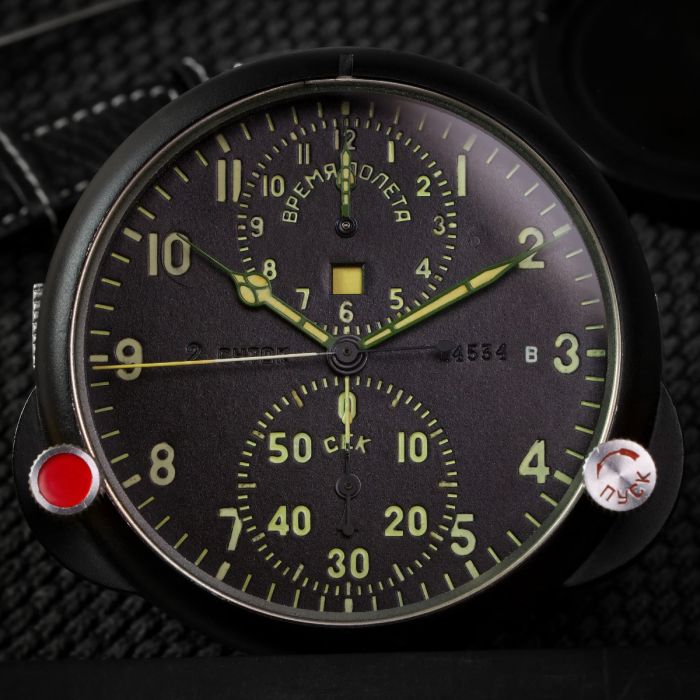 Only a few copies available in this new condition - of course tested and re-oiled. Rarity!

This is the model AYC-1 with additional Chronograph dial on position "6" - there is a separate 60 minute and 60 seconds Chronograph with 2 small hands  who is operated by pushing the knob on the right side.

This russian aircraft in-flight chronograph - made in Chelyabinsk - is still used today in many aircraft and helicopters of the Russian Air Force.

If the russian military initially had to use an imported  clock with its "Le Coultre Chronoflight caliber 310-5321" for its aircrafts, the watchmakers of the former Soviet Union soon began producing their own Swiss-style clocks with a caliber of their own design.

The second hand and the minute hand in the lower sub-dial are associated with the chronograph. The upper auxiliary dial serves as a flight hour counter and can also be used as an indicator for a second time zone.

The built-in temperature-controlled heating is supplied via two connections on the back of the clock with 27 volts operating voltage and works from <0 ° C.

This extremely resistant mounting clock is a real eye-catcher and does not necessarily have to be installed in just one MIG-29!

Delivery with instructions - but - sorry - without MIG29 aircraft ...

These clocks are stock items from Soviet military stocks - unused & rarely in this condition! The seals on the back of the clock are of course untouched!

These clocks are currently being manufactured in Russia - but at the current retailer purchase price starting at USD 1200.-