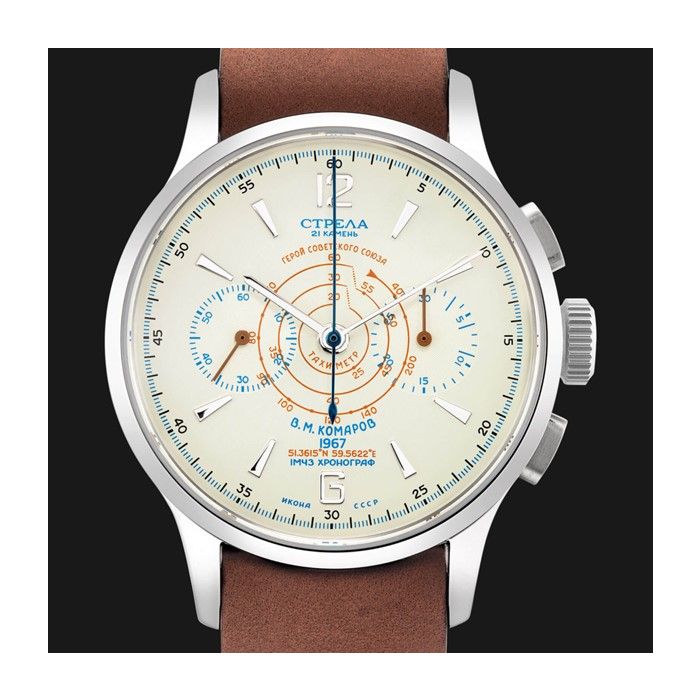 He was the first human to die on a space mission.

On April 24, 1967, Vladimir Komarov died in an accident when a reserve parachute failed to deploy on return from the Soyuz 1 mission.

On his Soyuz 1 mission, cosmonaut Komarov wore a Soviet "STRELA" watch - the remains of the watch were found on his wrist when the wreck of the space capsule was recovered.

Delivery including a decorated, closed back and an additional crystal back - you can chose which back you would like mounted on delivery when ordering - the other back be included.

Including dark brown Strela leather strap and with additional RIOS1931 leather strap or 9550 Molnija Milanaise strap of your choice (selection above, pictures of the straps see picture gallery for this watch)

In the 1950s to 1970s, Poljot in Moscow produced the famous Strela column wheel chronographs, caliber Venus 3017. The Strela chronographs are among the most beautiful watches from Russia, with their own design and a lot of history.

This high-quality Strela caliber comes from Seagull, caliber designation ST19, hand-wound, approx. 40-hour power reserve, 21,600 vibrations per hour, shock protection and 21 jewels. This caliber is a very reliable, accurate and durable movement. It is the exact replica of the Venus 3017 caliber - only with additional shock protection.

This Strela has a comfortable stainless steel case with a diameter of 40mm, a height of 14mm and a lug width of 20mm. 10 ATM waterproof! Strela also paid great attention to detail with the case to ensure that it corresponds to the famous predecessors - with a brushed side part and polished lugs and bezel. In addition, the typical baguette-shaped stop button. The watch has an ornate, screwed back case.

In this short video I compared the Strela 38, 40 and 42mm models: https://youtu.be/gsMqXyyyZfA