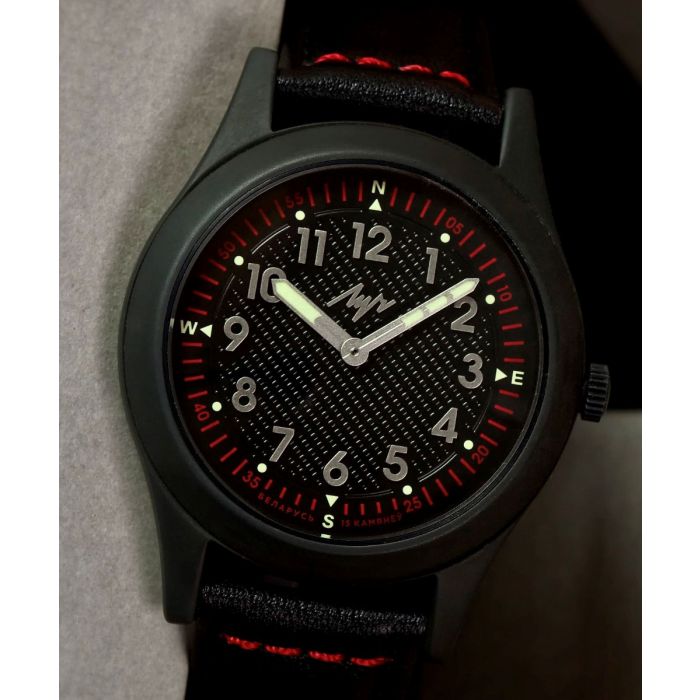 Skip to the beginning of the images gallery
Details
LUCH Defender  Nr. 277431552
New model from LUCH from Minsk, Belarus.
Black watchcase with anti reflective mineral glass, 41mm diameter.
Black, patterned dial with silver, arabic numerals, red scale and silver hands with lume. 20mm bandwidth.
Mechanical hand-wound caliber LUCH 1801.1 with 15 jewels, 21,600 vibrations, shock protection and a 38-hour power reserve. This caliber was developed in the Soviet Union and has been built unchanged in Minsk since then - it is a very robust and reliable caliber!
Delivery with leather strap, case and papers.
Video about the LUCH watch factory and the production of this special 1801.01 caliber:
https://www.youtube.com/watch?v=x83QnnmeYgc
You can find all LUCH models here: https://www.poljot24.de/marken/luch.html
Background information:
The Minsk watch factory "LUCH" from Belarus is one of the few companies in the former Soviet watch industry that has kept and continues the full cycle of mechanical watch production.
The factory was founded in 1956 as the "Minsk wristwatch factory Strahl" and produced very successfully the "Zarya" and "Vympel" brand watches, which are also in international demand.
In 1964 the ladies' wristwatch “Luch-1300” came on the market. This was the smallest wristwatch ever made in the Soviet Union.
From 1973 the product range was expanded to include watches for motor vehicles. The Lutsch company temporarily became the only supplier of such watches for the Soviet car company AwtoWAS and their Lada.
In 2010 the famous Swiss watch company "Franck Müller International B.V." joined LUCH as an investor company and signed an investment agreement with the Republic of Belarus.
I am very happy to be able to offer these Luch watches now, because they come from a watch factory with a lot of history and are special timepieces!
I get these watches directly from the LUCH factory and they are specially subjected to a further 3-week quality control for export.