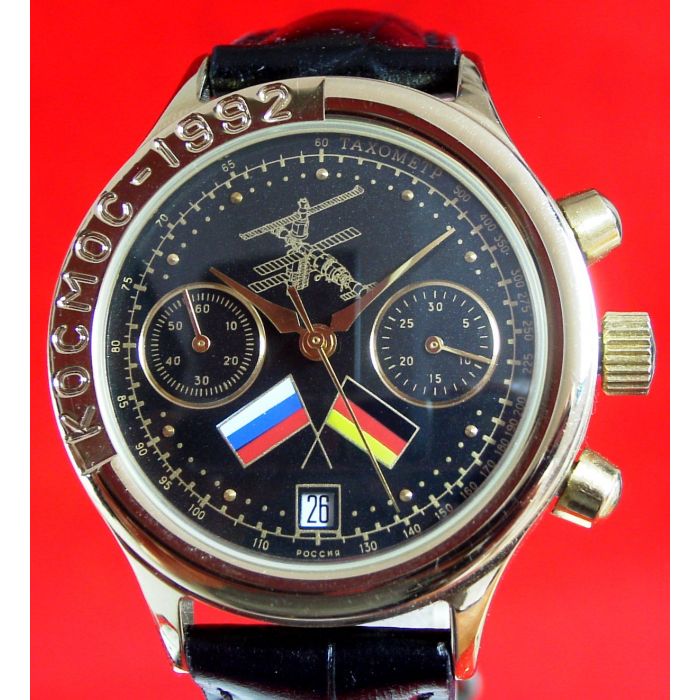 Skip to the beginning of the images gallery
Details
Poljot Chronograph "COSMOS 1992" - from Poljot inventory, new and unworn. RARITY!

In 1992, the Russian-German "MIR" partnership in Space started. This particular chronograph from the "First Moscow Watch Factory" Poljot  is identical to the model that was worn by the a cosmonauts during their journey into space. This watch with cyrillic inscription on the lunette  "Cosmos-1992"  was produced in a strictly limited edition of 1000 pieces in 1992.

After the political changes in the countries of the Soviet Union ,  spacemen of the western states increaslingly used  the station whose operation was led by Russia. With the arrival of the mission, EO-11, the new era began on board of the  - now - Russian station.

In 1992, with Klaus-Dietrich Flade the first German worked on the MIR. He was followed on September 3, 1995 by  Thomas Reiter, who was part of the 20th Mir-long occupation, then  followed in 1997 by Reinhold Ewald and the Frenchman Michel Tognini. 1994 the  German ESA astronaut Ulf Merbold visited the  Mir, who had previously been twice on the Space Shuttle in orbit. (Source Wikipedia)

Here you will find background information on the MIR space station! (Wikipedia)

This Poljot Cosmos 1992 is powered by the Poljot Valjoux manual winding caliber 3133 with 23 jewels, shock protection, 21.600 halfrotations and 48 hours of power reserve.

RARITY for lovers of special watches with historical reference! Only a few copies in stock. These watches are   new and unused - because they were produced in 1992, they are of course looked through by  my watchmakers, regulated and re-oiled!