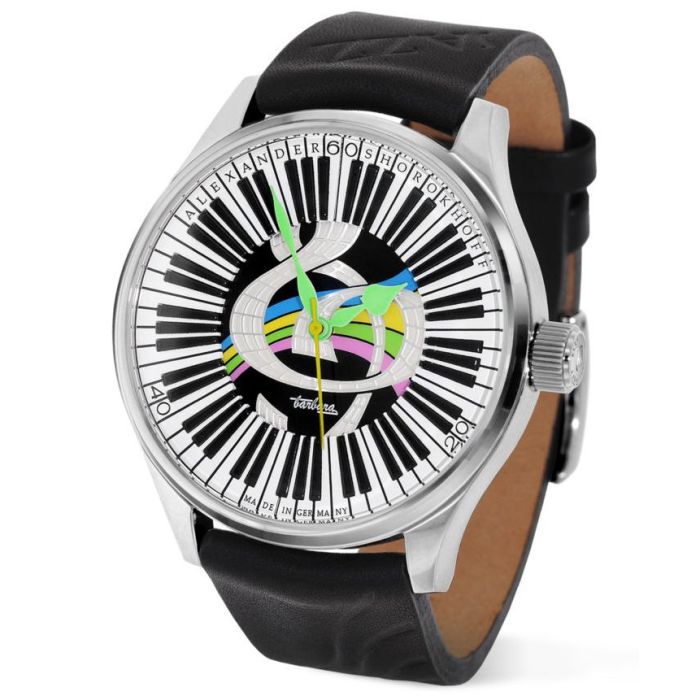 Press text:  "The key role in this watch is played by the dial. It is complicated on the one hand and beautiful on the other hand and in every aspect unique. The keys surrounding the dial immediately show the connection with music. An impression that is strengthened by the raised silver clef in the middle of the dial which blends in harmoniously into the unusual design of the watch. The clef at the same time stands for crossing borders, which is one of the trademarks of Barbara Dennerlein´s music.

The four coloured stripes in the middle part stand for the many facets of an unusual Lady of Jazz and for the unusual design of Alexander Shorokhov, which brings colour into the watch industry."

Dial: Three-piece with lofty clef; on the occasion of a concert in Munich by Barbara Dennerlein drew Mr. Shorokhoff such a clock with piano Dial as an invitation card for the concert and hung it out - then the audience reaction was so positive that he got down to implementation. Making it look as real and perfectly at the end is has not surprised me at Lord Shorokhoff - but even more excited!

More Info about Alexander Shorokhoff and this watch at Ablogtowatch: http://www.ablogtowatch.com/alexander-shorokhoff-avantgarde-watch-collection/