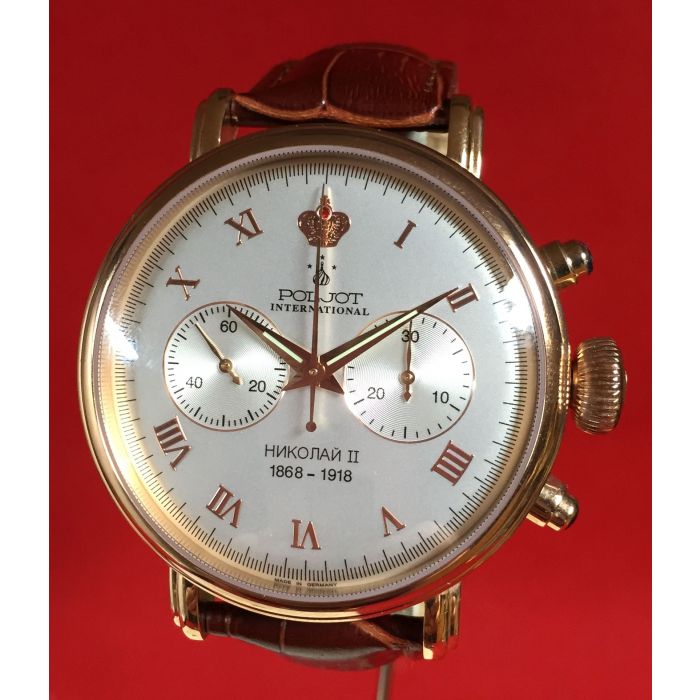 The person of Czar Nicholas II is shrouded in legends and a multitude of contradictions. One thing is for the historian beyond doubt - he was a very educated and good-natured man, who had for his family and Russia warm feelings. In August 2000, Nicholas II,  native of a German noble family of Hesse-Darmstadt, Tsarina Alexandra Feodorovna, and their five children were spoken holy from the Russian Orthodox Church.
This gold plated watch is dedicated to the memory of "Nicholas II".
For more information about the russian Tsar Nicolai II - see >>> WIKIPEDIA <<<
An exclusive new watch from the Alzenauer ( Bavaria )  watch factory  Poljot International. Made in Germany. Poljot International Reference Number: 2901.1941612

This chronograph pays tribute to the russian Tsar Nicolai II. The person of the Tsar Nikolai II. is shrouded in numerous legends and contradictions. One thing is for historians beyond doubt :  he was a highly educated and good-natured man, who brought to his family and to Russia warm feelings. In August 2000, Nikolai II. and  the german origin Tsarina Alexandra Feodorovna and their 5 children were canonized by the Russian Orthodox Church. This Poljot International watch series is dedicated to the commemoration of "Nikolai II."

The elegant silver dial shows redgold plated ,  applied Roman numerals, redgold plated hands with luminous inlays  and the imperial crown at position "12". The cyrillic lettering "Nikolai II" and his biographical data and the "Made in Germany" lettering complete the design.