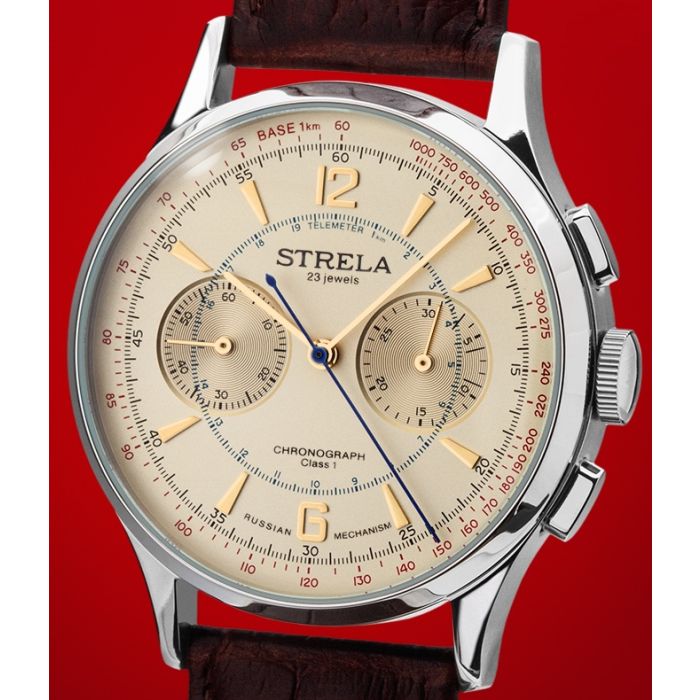 We have just received a handful of these new Strela Tribute TR42LAM models from STRELA - specially and unexpected with the decorated Poljot 3133 caliber.

An opportunity for watch lovers and collectors!

This Strela version Nr. TR42LAM  has the name TRIBUTE - the Chronograph  has a massive,  brushed stainless steel case with a polished bezel, polished bandconnections and pushers/crown.  The detailled and perfectly finished watchcase has a diameter of 42mm ( with crown  44.8 mm ), a height of 14 mm , a weight of 90 grams incl. leather strap and a bandwidth of 22mm Complete lug-to-lug width is 51mm.

A slightly curved, scratch-resistant sapphire glass provides a clear view on the special brightgolden Strela dial.  The dial of this Version TR42LAM is completely labeled in latin and shows a red tachymeter scale, a blue telemeterscale and very original gold plated Strela hands and Strela numbers/indexes! The stoppsecond hand is blue.

This old Strelas with 3017 column-wheel caliber never had a date indicator - this special Strela 42mm version Nr. TR42LAM is very close to this design. The date function was built out of the caliber and the dial is closed and therefore this Strela does not have a date indicator, too!

( for my customers outside of Europe = the Exportprice is EUR: 626.- the  shop deducts the Tax automatically... )