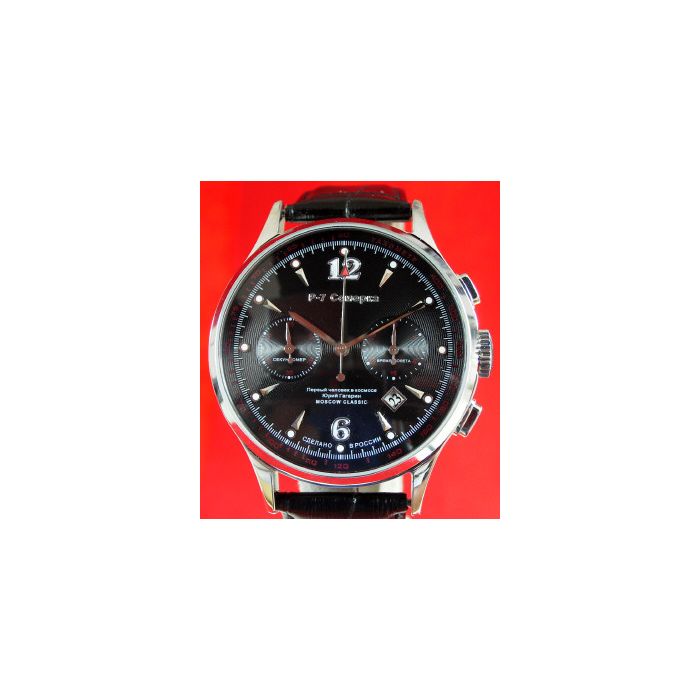 Skip to the beginning of the images gallery
Details
Only one last piece available !!
This new Moscow Classic P-7 "cemepka" ( = seven in cyrillic ) is a real detailled and elegant watch and named after the famous R-7 missile!
R7  ( cyrillic = P-7 cemepka ) is the first-ever intercontinental ballistic missile, which has opened a space age.
On the basis of R7 the whole family of the rockets-carriers which have brought the big contribution to development of Space Program. In the year of 1957, R7 has put into orbit the first artificial Earth satellite, and on April, 12th of 1961– The first-ever cosmonaut J.Gagarin.
On this significant day, later declared as the Day of Cosmonautic, at the cosmodrome “Baikonur”, rocket R7 was launched and after successfully reaching the first space speed, Space Ship "Vostok" with the First Ever Human Pilot, cosmonaut Yuriy Gagarin has made free orbital flight around the Earth.
The brushed stainless steel case has a polished lunette and polished crystal back as well as a polished crown and square polished push buttons - the watchcase has a diameter of 42 mm and a height of 15 mm. ( the watch weights 80 gramm )
The dimensions of the watch are big, but still very comfortable to wear.
The black dial with tachymeter scale  is decorated/fluted and shows silver hands,  indexes/numbers and the cryllic P-7 Moscow Classic signature.
Powered by the well-known Poljot Valjoux caliber 3133 ( with 21.600 half rotations/hour, shock protection, 48 hours power reserve ) , date between the position "4"-"5", slightly curved mineral glas and 21 mm bandwidth.
The watch comes with a richly decorated closed back  ! Limited to 500 pieces. With watchbox and black leather strap.