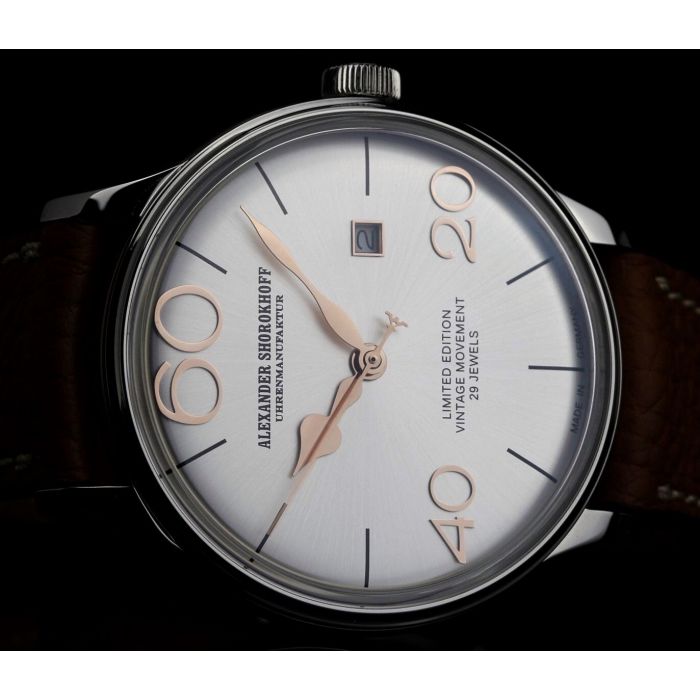 Special offer for my customers! As I am enthousiastic about this  model, I bought the complete edition of 35 pieces and can offer it - due to my 25th jubilee to my customers for the special price of  EUR: 999.- instead of EUR: 1225.-. See certificate info below ;

limited to only 35 pieces - Pick your favorite number below !

This is one of the nicest watches in my program and one of my very favorites! With original Poljot de Luxe automatic caliber from the 60´ies and with cylindric sapphire crystal which looks like a 60´ies acrylic crystal - a perfect watch with so many details !

The watch with a super flat luxury movement from the 60ies

It began in 1963, when the First Moscow Watch Factory started to produce the very flat movement deluxe cal. 2416.Poljot in small quantities. The watches featuring this movement were designed in a revolutionary way, for that time, in flat shape and with cylindrical curved glass. The purpose was to cover by this unique watch line the government’s demand in watches, which should be used as gifts to outstanding personalities of the Soviet Union as e.g. “heroes of socialist work” as well as high-ranking members of the communist party. For the first years, these watches were produced only in gold version.  Later, the production comprised watches in different metal cases.

The production process was complicated requiring high precision and taking a lot of time. Soon, it came in contradiction with the government’s policy of the 70ies which implied an increase of the watch production in order to cover the growing inland and abroad demands. Consequently, in the early seventies, the production of the calibre deluxe 2416.Poljot was stopped as ineffective and too expensive, after the factory had produced just a few thousand pieces.

The Alexander Shorokhoff watch manufacturer has accidentally found about 80 pcs. of these luxury movements cal. 2416.Poljot in good condition, and plans to produce a limited edition of 70 pieces. The remaining pieces will be kept for repairs and or other service targets.

For many years, the engineers of the First Moscow Watch Factory have been developing a unique and very thin movement in order to satisfy the government’s assignment to create a wonderful and comfortable flat watch. Many new ideas were born. Some of them were too expensive or too difficult to be realized but just one idea worked perfectly:

Instead of attaching the self-winding gear to the manual-winding calibre as it was usual for the former movements, in this draft the automatic gear was directly integrated into the movement. Since the minute wheel was not placed in the centre, thus it was enough space in the height for the seconds and rotor pinions. Moreover, the rotor was driven by the barrel through another intermediate wheel, which allowed to place it aside of the barrel and not partially above. The purpose of the work with two intermediate wheels was merely to place the automatic unit and the barrel in one layer without overlapping each other. So, a lower elevation profile could be achieved without the stability being curtailed.

By using further design details the engineers succeeded in creating a sensationally thin yet still rugged movement. Only some contemporary movements with micro-rotor were thinner, at that time.

The Alexander Shorokhoff watch manufacturer is proceeding to do complete overhauls of these unique movements in order to get the best possible characteristics. Additionally the rotors will be engraved and refined in the special “Alexander Shorokhoff”-style.

The “Alexander Shorokhoff” watch manufacturer has prepared the watch design in a similar flat manner like it was shaped in the sixties. The aim was to retain the “old” vintage tradition and to choice the right direction for this production line.

The watch model “Vintage V5” by Alexander   Shorokhoff will be produced in stainless steel  cases. The middle-size case (40 mm) will be   equipped with compound cylindrical sapphire glass, sapphire see-through glass back, and will be waterproof up to 5 atm.

Following the models of the sixties, the new “Vintage V5”-watches of the AS watch manufacturer will have curved dials in silver and champagne colours. The rose gold coloured appliques are produced in a complicate treatment by adapting them to the vaulted part of the dial. In this way the watch will get a quiet noble appearance.

The wide dial shape ought to transmit a feeling of a bigger size than the watch was in real. And this leads to another advantage: it can be worn by both – gents and ladies.

Technical data of the “V5“

Extract from the certificate supplied with the AS.V5-S ​​(silver dial)

This watch was not chosen at random. The watch wrote history and goes back to the name of the company "Poljot" just like the two "Jubilars". This began in 1963, when the extremely flat automatic movement Kal.2416.Poljot de Luxe "was first produced in the then Soviet Union.

Some time ago, the manufactory tracked the last 80 new original clockworks ; The rotor was hand engraved. Thus, two unique vintage series of 35 specimens each were made in the stainless steel case with cylindrical sapphire glass. One of the series - with a silver colored dial - was chosen as the anniversary model for the company Poljot24.

The design was developed by Mr. Alexander Shorokhov. The complete limited edition of 35 pieces with a silver dial is distributed by Mr. Julian Kampmann. This certificate guarantees that these watches are originals.